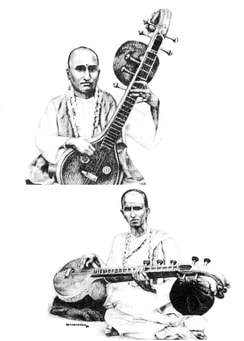 Karaikudi Subbarama Iyer (top) and Sambasiva Iyer (bottom)
The Karaikudi Veena tradition (bani) is the only living tradition from Southern India with a lineage extending to eleven generations. The origin of the Karaikudi Veena bani approximately dates back to the 1700s. Classified under the Tanjavur umbrella, the root of the Karaikudi Veena tradition seems to have arisen in Tirugokarnam of Pudukottai district in Tamil Nadu, India. The Karaikudi Veena bani rose to prominence in Karaikudi, and continued to Madurai, Periyakulam, Kumbakonam, Chennai, Bangalore, and at present, the United States of America.
​
Digging to the deepest roots of the tradition, which rely on oral records, the names of the first two generations of the Karaikudi Bani have been lost. However, the third and fourth generation descendents, Vainika Malayappa Iyer (c. 1750) and Venkatesvara Iyer, respectively, have been found in the palm leaf manuscripts. Subbaraya Iyer who represented the fifth generation was first patronized by the raja of Sivaganga and later by the raja of Pudukkottai. In Tirugokarnam of Pudukkottai district, the sixth generation Vainika Subbaya Iyer was a court musician under the ruler Ramachandra Tondaiman. Both the fifth and sixth generations were recipients of the great honor kanakabhishekam (showering of gold) which was conferred by the raja on highly regarded scholars, artists, and poets. The seventh generation vainikas were Subbarama Iyer (1883-1936) and Sambasiva Iyer (1888-1958) who rose to fame from the town of Karaikudi. The duo Subbrama Iyer and Sambasiva Iyer were affectionately called the Karaikudi Brothers, beginning a new era in which the tradition came to be known as the Karaikudi Veena Bani.
​
​Until the seventh generation, the tradition was patriarchal, passed from father to son; however, Subbarama Iyer had no male heirs to continue the lineage. Therefore, three of Subbarama Iyer’s daughters, Lakshmi, Shankari and Meenakshi continued the eighth generation of the Veena bani through teaching and performance. 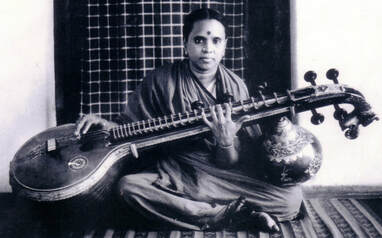 Lakshmi Ammal
Within the eighth generation, Lakshmi Ammal (1918-1985) settled in Madurai teaching and performing, while raising a large family of which Rajeswari Padmanabhan (1939-2007), Karaikudi Subramanian (adopted son of Karaikudi Sambasiva Iyer), Sasikala Sooriyanarayanan (1956-2002), and Chandramouli Narayanan continued the ninth generation. Shankari Ammal (late) from Kumbakonam was teaching and performing; she is succeeded by her daughters Kamala Pasupati, Vasantha Sivaramakrishnan, Jayalakshmi Sugumar, Naga Balasubramanian, and Lakshmi Chandrasekhar, who continue to teach and perform. Meenakshi Ammal from Periyakulam continues to teach Veena at her senior age of 90+; her daughter Rajam Balakarishnan (___ -1989) continued the tradition by teaching in Madurai. 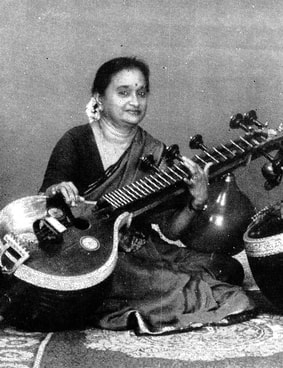 The eleventh generation of Veena players Kapila and Sushruta Chandramouli (sons of Sreevidhya & Chandramouli) as well as Chandrasekhar Sundarrajan (grandson of Rajeswari Padmanabhan) are continuing the voyage beyond the borders of India.